Matthew Aslett over at Computer Business Review has been tracking the flow of venture capital into Open Source startups and was kind enough to share some of his data with me this week as I was preparing for the upcoming Software 2007 and OSBC conferences. The data was originally collected and published by Matt Asay and Robin Vasan.

The level of VC investment flowing into Open Source is impressive and growing. Last year $481MM was raised by 48 startups. Since 2000 Open Source startups have raised over $1.9B in financing. Here are the last three years:

I plotted the amount of investment and number of deals by quarter since 2000 and came up with this graph: 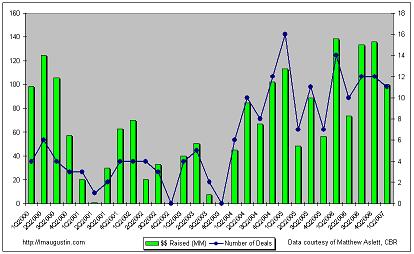 For the last three years VCs have been investing in about 11 deals per quarter (trending upward slightly) with increasing average deal size. The first quarter of 2007 continued this trend with $100MM flowing into 11 deals.

So much for the historical data; what’s the Open Source venture climate likely to look like for the next few years?

I think the number of investments made per quarter, as Matthew is currently tracking them, will stay flat to decline in 2007 and 2008. There are two reasons for this. First, the venture business is a portfolio business. For most funds it doesn’t make sense to focus all of your investing on one sector. Typically a venture fund makes money off of 2 or 3 highly successful investments. So a fund makes one or more investments in multiple sectors, spreading the risk across both the companies and sectors. It’s the principle of diversification. Once a venture firm has a few Open Source investments they’re not as likely to do another one lest they risk over-weighting their portfolio too much to one sector. (Of course I personally am a counter-example, being heavily invested in Open Source; So much for diversification!) A lot of firms already have their handful of open source deals. This creates an interesting dilemma for entrepreneurs. It becomes more difficult to get funding from the experienced Open Source investors because their portfolios already have several Open Source investments.

Second, the ability to make a large return on an investment in an open source company is still largely unproven and investors are going to hesitate to plow more money into Open Source until they have more evidence of success. Yes, we have a few success stories: Red Hat, JBoss, TrollTech, and SourceFire. But that’s a pretty thin list. Further, JBoss, while a success at a $350MM acquisition, was not evidence of the $1B target venture investors would like to see. Also, SourceFire has stumbled and is now struggling with a market cap just over $300MM. Again, a success, but a modest one in the VC industry and not the evidence of the ability to reach $1B that venture investors need to see. Based on the maturity of the existing private Open Source companies, I don’t think we’re likely to see another large proof point until 2008, and multiple proof points until 2009. I think MySQL is a first quarter 2008 IPO if they can successfully transition to US GAAP accounting and demonstrate predictable growth in 2007. After MySQL there are several private Open Source companies that will do more than $20MM in bookings or revenue in 2007, positioning themselves for $40MM+ in 2008 and an early 2009 IPO. That means we’re at least a year, and maybe 2, from the more significant proof points needed to encourage more investment.

In many ways that’s not bad. It means Open Source may be becoming more common. Rather than being an unusual strategy, it’s becoming something that virtually every software company will adopt at some level.

This trend is still continuing too.

I think open source is the next frontier. Rather then force feeding the consumer, ht econsumer it tell or showing the corporations what they want.

We just released our commercial real estate software into an open source project and we are getting lots of activity.

Our open source project has lots of upside for income generation.

Since our software is probably the most functional and impressive at generating leads, we are hoping to find some information on how we can obtain funds to help our project.

The comments to this entry are closed.

(Some of) My Favorite People